Affinity Plus DNA & RNA Oligonucleotides and Affinity Plus qPCR Probes are customizable, locked nucleic acid sequences. By including 1–6 locked nucleic acid bases, you can not only increase hybrid melting temperature (Tm) by >15°C but modulate Tm for your specific hybridization assay. These sequences enhance SNP and mismatch discrimination; allow for design of shorter, more effectively quenched probes; and provide increased stability and nuclease resistance.

Locked nucleic acid bases impart heightened structural stability to Affinity Plus DNA & RNA Oligos and Affinity Plus qPCR Probes. This enhanced stability is derived from a methylene bridge bond that links the 2′ oxygen to the 4′ carbon of the RNA pentose ring of this modified RNA base (Figure 1).

Figure 1. An Affinity Plus monomer. These modified bases contain a methylene bridge bond between the 2′ oxygen and the 4′ carbon of the pentose ring.

Use Affinity Plus qPCR Probes for SNP genotyping, transcript variant identification, and sensitive target detection in challenging samples, such as FFPE tissue or biofluids. The tighter binding of Affinity Plus qPCR Probes increases their target specificity. Thus, it becomes easier to design probes for challenging sequence regions, such as those with high AT content, or where target areas are short. The relatively stronger binding strength also makes it possible to use shorter probes in your hybridization assays. Shorter probes can be an asset, especially in rare target detection, such as SNP analysis, as shorter probes are more effectively quenched and provide greater mismatch discrimination, thus returning stronger, more accurate signals.

The cluster plots from 4 genotyping assays shown in Figure 3 demonstrate that LNA containing Affinity Plus qPCR Probes generate clear, tightly clustered genotyping calls identical to those produced with PrimeTime LNA Probes. (Review probe sequences used in these assays in Table 1 of the Performance tab on the Affinity Plus qPCR Probes product page.) 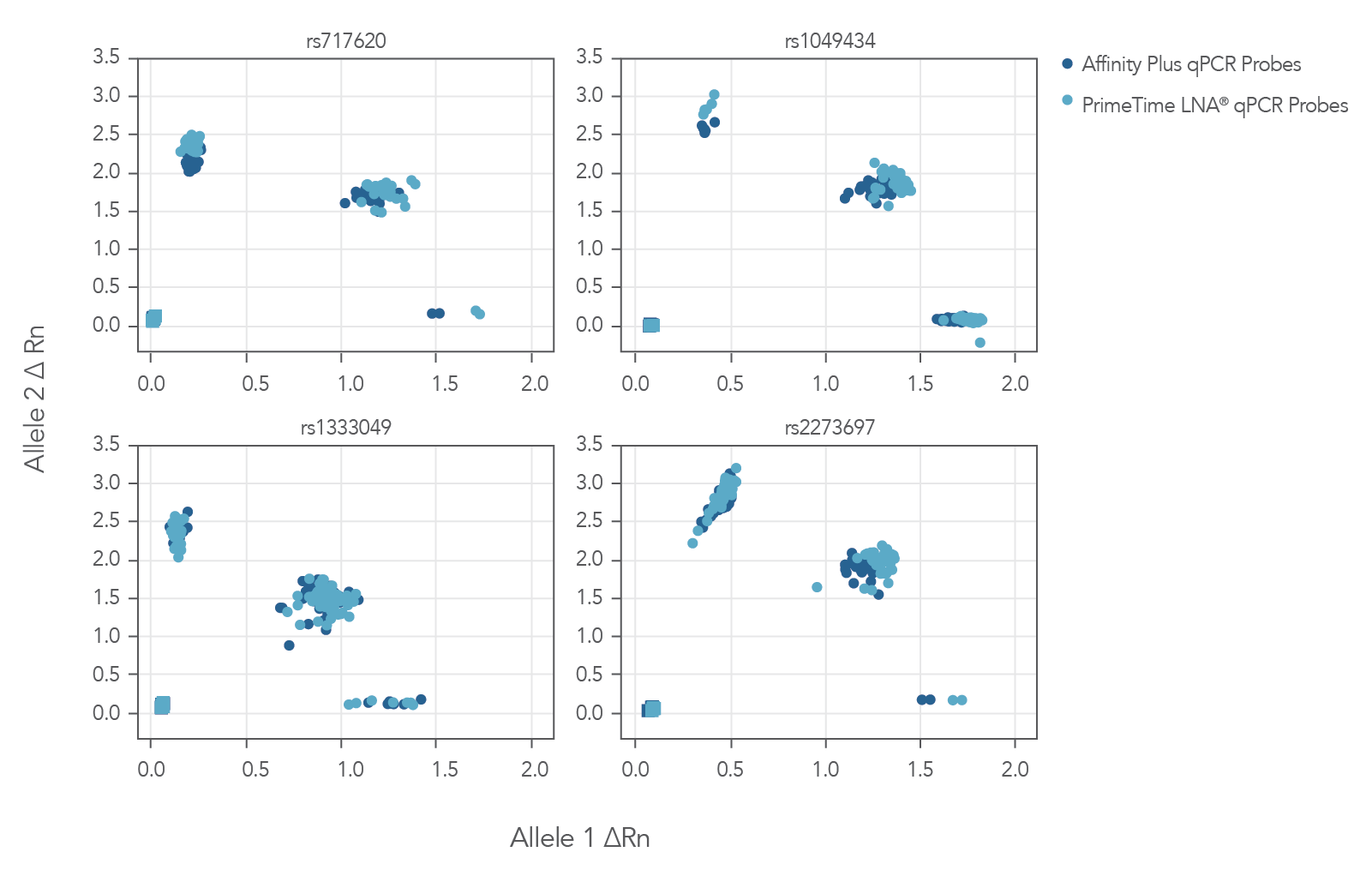 In addition, Affinity Plus sequences provide increased resistance to exonucleases. Thus, Affinity Plus Oligos and qPCR Probes won’t be degraded as easily in vitro or in vivo.