Citation summary: Coelho et al. have developed a short gRNA-based system, called CRISPR-GUARD, for blocking off-target effects while preserving on-target activity. Previous attempts to increase Cas9 recruitment to the target site with short gRNAs did not permit nuclease activity. When co-delivered with on-target gRNA, CRISPR-GUARD can effectively reduce off-target effects at multiple sites simultaneously while preserving on-target activity for indel corrections. CRISPR GUARD is safe to use, as it does not elicit editing activity on its own.

CRISPR-Cas9 systems have changed the landscape of genome editing; however, off-target Cas9 mutagenesis can elicit unwanted effects. Although gRNA design is continually improving, off-target effects cannot be eliminated when targeted editing location is short, as is the case with correction of disease-causing mutations [1,2].

A system that further reduces or eliminates off-target mutations while preserving on-target activity is needed. Previous studies have shown that gRNAs shorter than 16 nt can recruit Cas9 to the correct site, but they don’t permit nuclease activity [3–5]. Coelho et al. describe the development of a system, called CRISPR Guide RNA Assisted Reduction of Damage (CRISPR GUARD), which aims to block mismatched gRNAs from binding off-target sites through competition with an inactive Cas9 complex containing the shortened guides. They use a combination of in vitro and cellular studies to test an array of GUARD RNAs and determine the best design for blocking off-target mutations while maximizing on-target editing.

In contrast to the in vitro assays, all GUARD RNAs effectively protected the off-target site without significantly interfering with on-target cutting when transfected into Cas9-expressing HEK293 cells along with VEGFA gRNA. Dosing experiments demonstrated that higher GUARD RNA concentrations further reduced off-target effects, and the study authors recommend an optimal ratio of 5:1 GUARD RNA to gRNA.

To confirm the relevance of GUARD DNA, Coelho et al. next co-delivered inactive Cas9 complexed with an off-target specific 14 nt GUARD RNA and wild type Cas9 complexed with on-target gRNA to HEK293 cells. The GUARD RNAs effectively protected the off-target site, and there was no redistribution of active Cas9 to other off-target sites. Further investigation of various GUARD RNAs revealed that off-target loci might be more amenable to protection by CRISPR-GUARD than other sites. For example, low GC-content lowered the protective ability of the GUARD RNA in this experiment.

Coelho et al. expanded the study by testing whether multiple off-target sites could be protected simultaneously by multiplexing three GUARD RNAs together. Multiplexing was generally successful at protecting multiple off-target sites, with non-competitive GUARD RNAs yielding the best off-target protection without also interfering with on-site editing. To further evaluate the safety of GUARD RNAs, the study authors confirmed the in vitro results in HEK93 cells, showing that none of the GUARD RNAs delivered without on-target gRNA could induce Cas9-mediated genome edits.

Based on the results, which were achieved with indel editing, the study authors next assessed CRISPR GUARD for base editing, which is more prone to off-target effects. Using HEK293 cells, they achieved robust protection of off-target cytosines by GUARD RNAs. Similar to the results with Cas9 for indel editing, the GUARD RNA did not inhibit base editing by Base Editor 3 (BE3). However, unlike with Cas9, GUARD RNA alone could elicit a small but significant number of editing events.

The proportion of functional GUARD RNAs increased with higher GC content, and GUARD RNAs with a higher degree of spatial overlap with the gRNA, especially at the seed and PAM region, yielded superior off-target protection. These results suggest off-target protection by CRISPR-GUARD is mediated by direct competition with gRNA and highlight important considerations for GUARD RNA design.

Coelho et al. demonstrate that CRISPR-GUARD is an effective mechanism for preventing off-target Cas9 effects without interfering with on-target edits and can be used to protect multiple off-target sites simultaneously (Figure 1). They describe key considerations for GUARD RNA design, including distance from the off-target PAM, GC-content, and concentration. 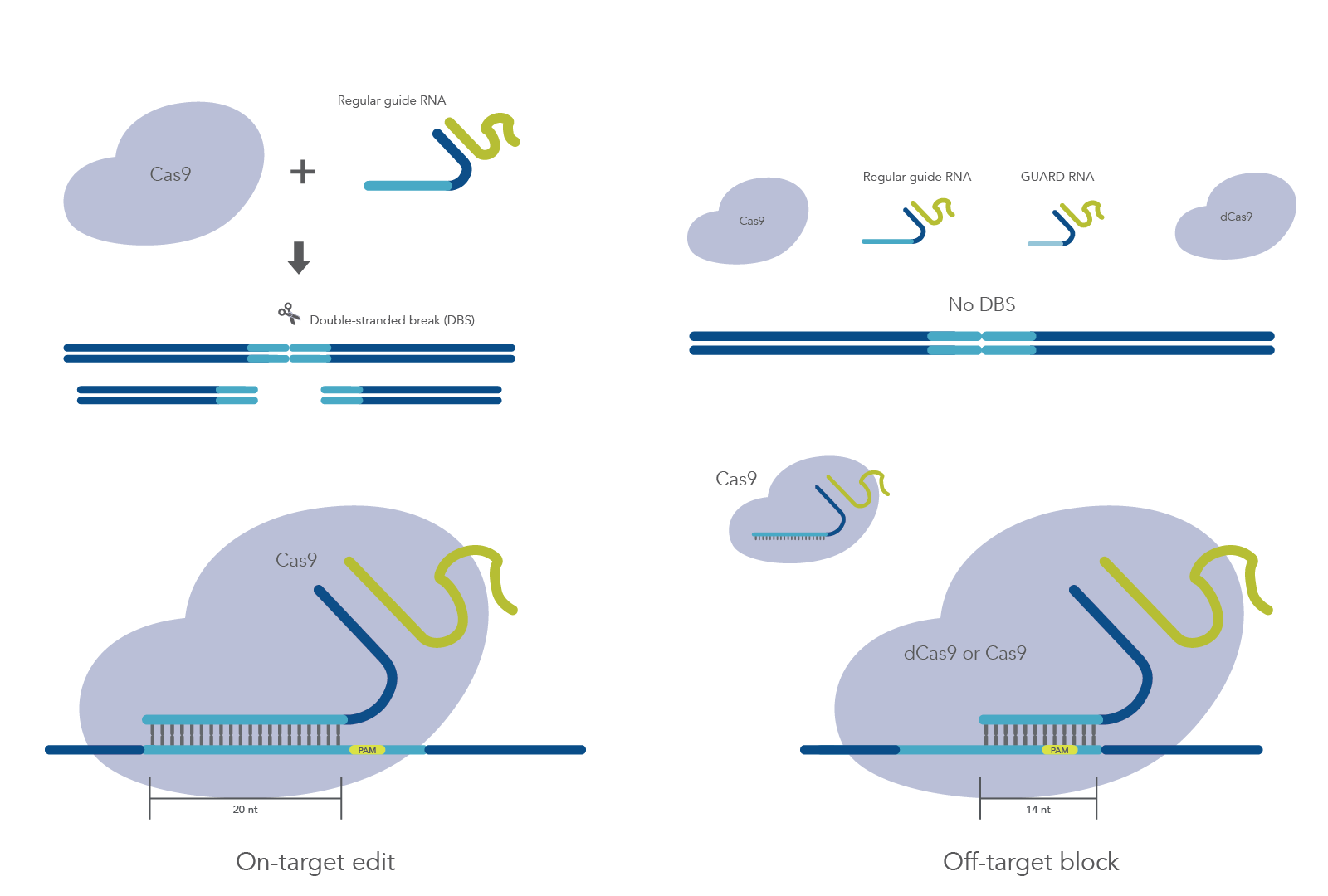 CRISPR GUARD uses shortened guide RNAs (gRNA) to prevent off-target mutations in CRISPR-Cas9-mediated genome editing. Cas9 complexes with a gRNA to target a specific location in the genome. When the gRNA is long enough, the enzymatic activity of Cas9 cuts both strands of the target. If a shortened gRNA is designed to target the area around the PAM site of a known off-target site, then Cas9 will bind to the site, but its enzymatic activity is not activated. By attaching to the off-target site, it prevents the site from the erroneous cutting by the Cas9-regular gRNA complex.

From plasmid construction to CRISPR GUARD and other genome editing experiments, IDT offers a wide variety of reagents to support your research:

IDT offers a variety of plasmid construction reagents, including:

The IDT line of Alt-R™ CRISPR genome editing products, include:

For research use only. Not for use in diagnostic procedures. Unless otherwise agreed to in writing, IDT does not intend these products to be used in clinical applications and does not warrant their fitness or suitability for any clinical diagnostic use. Purchaser is solely responsible for all decisions regarding the use of these products and any associated regulatory or legal obligations. Doc ID# RUO22-0791_001

Gene fragments from 125−3000 bp shipped plated, or in suspension and ready for use.