Considerations when adopting published sequences for your own qPCR assay

Lab tip: Published papers that use qPCR applications are a resource of vetted assay sequences. These can be co-opted and converted to more sensitive, double-quenched probes for use in your own experiments. Before ordering, though, go through this checklist to ensure that these sequences will work well in your assays, and consider up-to-date PrimeTime Predesigned qPCR Assays with guaranteed efficiencies of >90%.

Researchers often find probe and primer sequences for a specific qPCR assay in the literature, which they want to use for their own experiments. And why not? These sequences have already been vetted by other scientists and used successfully to generate publishable data.

However, before you order assays published in the literature, consider whether they were based on outdated sequence information. With the increasing amount of cataloged sequencing data, there has been a concomitant increase in the number of identified single nucleotide polymorphisms (SNPs) and updated transcript structure and annotation. While the frequency of SNP occurrence may make them unrealistic to avoid when choosing PCR primer and probe sequences (the human genome contains a SNP approximately once every 22 bases), it is important to take their position into consideration. See Considering SNPs when designing PCR and qPCR assays, for data on SNP frequency, and a discussion of the impact SNPs can have on PCR and qPCR assay results. The article also provides recommendations for managing SNP impact on your assay results.

Converting literature-derived probe sequences to double-quenched probes that contain an internal quencher has become popular over the past few years, due to the lower background fluorescence, increased signal, and reduced crosstalk double-quenched probes afford. This adaptation is easily done. IDT provides 2 types of internal quenchers, ZEN and TAO Internal Quenchers, that are compatible with a wide range of 5′ fluorescent dyes and 3′ quenchers (see Figure 1).

Figure 1. Positioning of internal quencher within a probe sequence. While traditional probes have approximately 20–30 bases between the fluorophore and the quencher, the internal ZEN or TAO quencher decreases that length to only 9 bases. This shortened distance, particularly when combined with the traditional 3′ end quencher, leads to more thorough quenching with much lower background and enables the use of much longer probes for designing in AT-rich target regions. In addition to the significantly decreased background, the Double-Quenched Probes also have consistently reduced Cq values and improved precision when compared to traditional probes. Use of the Double-Quenched Probes can allow users to experience both increased sensitivity and precision in their qPCR experiments.

Adding ZEN or TAO Internal Quenchers into standard hydrolysis probe sequences with 5' fluorescent dyes and 3' quenchers is straightforward and will not appreciably affect probe Tm. However, note that probes from the literature containing MGB (or other Tm boosting modifiers) will have a reduced Tm when ordered without these modifications. Therefore, before ordering, it is a good idea to assess whether the published probe sequence has the ideal Tm to function optimally in your assays.

Use these steps to evaluate the published probe sequence before you order:

Order the published probe sequence as a double-quenched probe

Now that you have confirmed your primer and probe sequences are up to date, and determined that the Tm of the probe sequence is optimal for use in your assay, convert a probe of your own design or one from the literature to one containing a ZEN or TAO Internal Quencher. Go to our qPCR probes design tool (Figure 2), and follow these steps to order the double-quenched version of the probe. To enter complete assays of both primer and probe sequences, use our qPCR assay design tool and follow these same steps):

Step 1. Provide a name for this sequence entry. (See the Step 1 blue arrow in Figure 2.)

Step 4. Choose your 5' dye + 3' quencher combination from the dropdown list. (See the Step 4 blue arrow in Figure 2.) The dropdown list of modifications is shown in Figure 3. Note that with the 5′ dye choice, a compatible ZEN or TAO internal quencher will be automatically integrated into the appropriate position in your probe sequence. 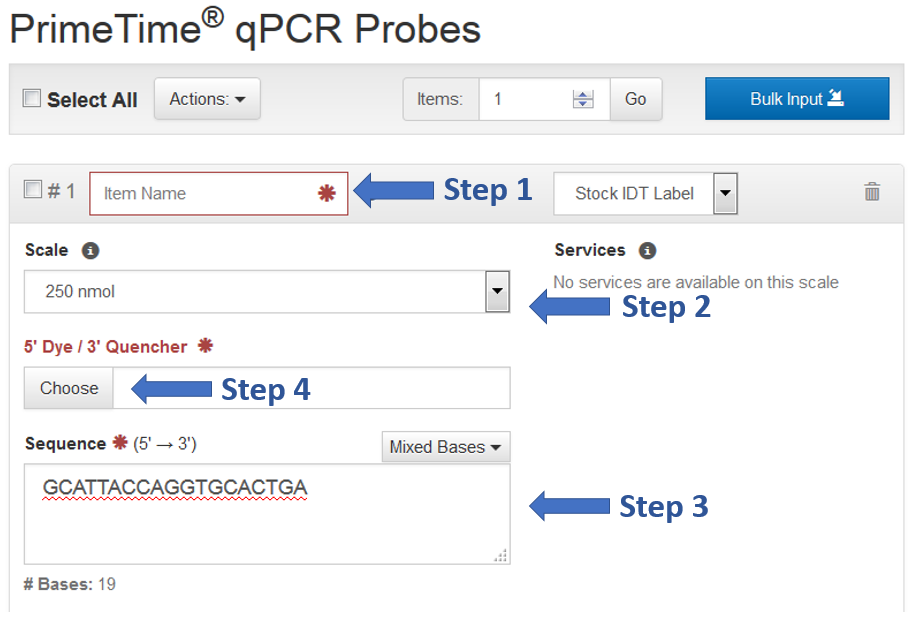 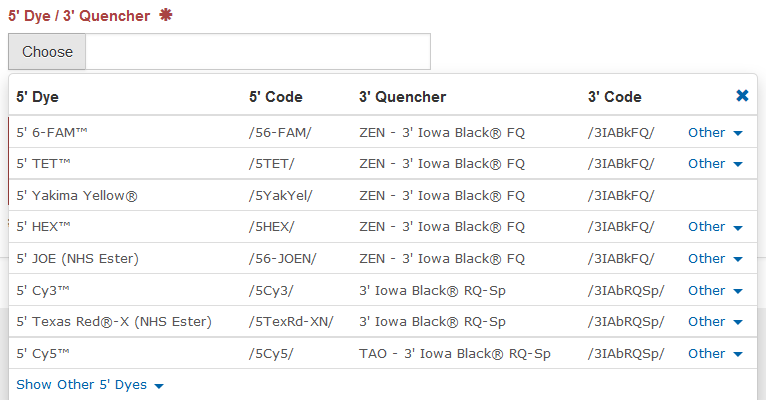 Figure 3. ZEN and TAO Internal Quenchers are compatible with a range of 5′ fluorescent dyes.

An alternative to published sequences

A quick search of the IDT PrimeTime® Predesigned qPCR Assay database provides assays that cover the human, rat, and mouse transcriptomes that are guaranteed to perform with PCR efficiencies between 90–110% and R2 >0.99. The database design engine uses complete target sequence information that is updated regularly.

Further questions about probe design and use of double-quenched probes?

You can always contact our Scientific Applications Specialists for help in designing your probes and assays. Reach them at applicationsupport@idtdna.com.