Researchers at Tetracore specialize in developing large sets of robust probe-based qPCR assays for use in a multiplex format to detect infectious diseases and bio-terrorism threat agents. Here they discuss the need to: use probe dyes compatible on common PCR instruments, maintain low background with multiple probes, and reformulate assays to address viral mutation; and how ZEN™ Double-Quenched Probes have helped meet these criteria.

The scientists at Tetracore (Rockville, MD, USA; www.tetracore.com) specialize in developing diagnostic PCR assays that detect infectious diseases and bio-terrorism threat agents. They are experienced at optimizing PCR reagents because their assays are used by researchers, such as military and veterinary diagnosticians, who work in a wide range of environmental conditions, and who use a variety of PCR instrument platforms. Thus, the assay reagents need to be robust and forgiving. Assay development requirements for Tetracore researchers include:

We spoke with Dr William M Nelson, co-founder and president of Tetracore, and one of the company’s research scientists, Rolf Rauh, who both elaborated on how the company has addressed these challenges.

Keeping up with rapidly mutating viruses

“Many of the viral infections we develop assays for are caused by RNA viruses, which can change rapidly over time through high mutation rates, not unlike HIV in humans. This requires us to continually check GenBank to see if there are new strains evolving that have the potential to be missed by our assays. We are constantly reformulating our assays so that they will detect all of the relevant viral variants,” notes Dr Nelson.

Another major challenge for the Tetracore researchers is to be able to provide a unique set of assays that will identify all strains of a disease-causing organism. For example, Porcine Reproductive and Respiratory Syndrome virus (PRRSV), one of the diseases for which Tetracore provides test reagents, is actually caused by a broad group of viruses, of which there are 2 main types: North American–like and European-like (named for where they were first isolated). These 2 main types are different enough that a single set of primers and probe will not identify both. So the scientists at Tetracore use several primer and probe sets in a single qPCR assay to be able to detect all of the variants.

Currently, the Tetracore PRRSV assay contains 34 primers and 8 probes! Not only must these primer and probe sets be designed to work simultaneously, in a multiplex format, but signals detecting the different PRRSV types need to be distinguishable. The 8 probes use 3 different fluorescent dyes, and must be detected by 3 non-overlapping real-time PCR instrument channels. One channel is dedicated solely to the control, so the other 2 channels are left to detect the remaining 7 probes. Therefore, the choice of dyes used with these probes is critical.

Tetracore’s selection of dyes requires numerous considerations. Their customers use a variety of real-time PCR instruments, and common dyes do not always provide sufficient signal resolution on every platform. Additionally, some instruments need to be calibrated for the chosen dyes, or at least have channels sufficiently separated to detect the dyes without overlap. Dye choice is also restricted by the buffers and even common plasticware used, which themselves can alter fluorescence. For the PRRSV assay, Tetracore settled on FAM (FAM channel) for probes detecting 1 strain of virus, ATTO 550/Dragonfly Orange™ (DFO) (TAMRA or Cy®3 channel, depending on the instrument) for probes detecting them second strain, and ATTO 647N (Cy5 channel) as the inhibition extraction control.

The additive signal of the multiple probes in the reaction mixture creates excessive background fluorescence. Even though the probes are quenched, longer probes and those with secondary structure that restrict quenching can generate significant background fluorescence, especially in the FAM channel. Therefore, the Tetracore team had to devise methods for combining all of these probes into a single cocktail, but still provide enough discrimination for accurate disease detection. “In order to maintain a robust assay that was relevant, we needed ways to limit the amount of background fluorescence,” remarked Rolf Rauh.

“In addition to providing us with the ZEN Double-Quenched Probes to help resolve our background issues, IDT has been invaluable, both from a quality and turnaround time perspective. We frequently make use of being able to order primers and receiving them the next day.”—Rolf Rauh, Scientist at Tetracore

In addition, these probes have allowed Tetracore to more easily provide assays for platforms like the Cepheid SmartCycler®, which has a fixed amount of “headroom” (the amount of overall signal allowable before saturation). The high background from the traditional, single-quenched probes in the assay results in “railing”, i.e., where the signal plateaus, producing a straight line, because the instrument does not have enough dynamic range to accommodate the process (Figure 1A). Railing can lead to signal bleed over into adjacent channels, which can complicate data interpretation if those channels are also being used (Figure 1B). The reduced background fluorescence of ZEN Double-Quenched Probes compared to traditional single-quenched probes is demonstrated in Figure 1C.

Dr Nelson also noted, “The ZEN Double-Quenched Probes have allowed us tocontinue adding probes to the already complex PRRSV assay mix to accommodate the changing viral landscape. This IDT product has helped us address the addition of new probes and primer sets to our assay very quickly.” Thus, adoption of ZEN Double-Quenched Probes has allowed the Tetracore researchers to quickly reformulate their assays with the addition of probes to address rapid viral mutation, while reducing the background they would otherwise generate.

Thermal cycler and real-time detection system emission and excitation filter settings vary from manufacturer to manufacturer, so your instrument must be calibrated for each dye as part of the experimental optimization process to enhance dye specificity and minimize background and overlapping of fluorescence signals.

The Tetracore assays are unique in that the company has spent a lot of resources on developing assays that can be detected on 3 well-separated channels applicable to the majority of real-time PCR instruments. However, real-time PCR assays from most manufacturers are not usually as rigorously tested. Therefore, it is important to verify that your qPCR instrument is calibrated for the probe dyes you choose. If not, you must perform calibration according to the instrument manufacturer’s instructions or change your dye choices.

Refer to the instrument manufacturer for specific instructions. Note that IDT also provides calibration instructions for some of the more popular Applied Biosystems Real-Time qPCR instruments (7300, 7500, 7900) that can be used to calibrate dyes not supplied by Applied Biosystems. See the Support tab at www.idtdna.com/primetime.

Recommendations on dye selection for multiplex real-time PCR assays can be found on the PrimeTime qPCR probe-based Assays page, under the Support menu. For more information on dye spectral emission and excitation values, go to the IDT dye modifications page. 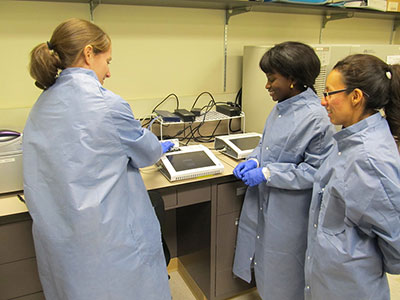 As an alternative to retiring in July of 1998, Dr William M Nelson chose to start a company with three of his Navy Medical Research Laboratory (Bethesda, MD, USA) colleagues. “Tetracore” opened its doors that November and now employs 70 staff, and remains privately held.

The company develops products for antibody-based rapid response diagnostics, using lateral flow technology for biodefense—these include assays for the detection of such biothreats as anthrax, ricin, and plague. Tetracore also specializes in real-time PCR assays for infectious diseases of interest to the agricultural and veterinary sectors. The company does similar work on a contract basis for the US government, which includes providing room temperature, dried down qPCR assays that are stable for over a year.

By the end of 2013, Tetracore will have released the second generation, portable, battery-operated PCR instrument for field use. This 8-well system is capable of handling 3–5 distinct dyes.