ESI mass spectrometry—why we use it for oligonucleotide quality control

How (and why) ESI is used in oligonucleotide synthesis

IDT has been, and still is, a pioneer in using mass spectrometry for quality control in oligonucleotide synthesis. Learn about why a particular method, electrospray ionization (ESI), is used ubiquitously in our manufacturing processes.

Today's modern synthesis platforms and high-throughput automation systems support robust oligonucleotide manufacturing capabilities. Researchers can now acquire countless variations of single- and double-stranded oligos faster and more affordably than ever before. Still, oligo synthesis is a complex process, requiring more than 100 sequential chemical reactions to make a single 25-base sequence. And while the sheer volume of oligo production has increased through the years, the importance of precise and accurate synthesis remains unchanged.

As a global leader in custom oligo synthesis, IDT pioneered the use of mass spectrometry (MS) analysis for quality control in oligo synthesis. We have since shifted our MS methods from matrix-assisted laser desorption/ionization-time of flight (MALDI-TOF) to electrospray ionization-ion trap (ESI-ion trap).

Here, we provide an introduction to ESI technology and why it is now our preferred method of MS quality control.

What is ESI-ion trap mass spectrometry?

MS analysis encompasses a variety of methodologies, which have applications in a range of scientific fields. However, all forms of MS involve some variation of 2 sequential steps—ionization and mass measurement. Although "ESI" is often used to describe an entire MS method, the term actually refers to just the ionization step.

Here, a small amount of sample (synthesized oligo) with solvent is introduced into the instrument as a fine liquid spray. Ensuing chemical reactions separate sample molecules from the solvent, and in doing so, remove multiple protons, resulting in molecular species with differing charges. A general schematic of an ESI-ion trap MS instrument is shown in Figure 1. 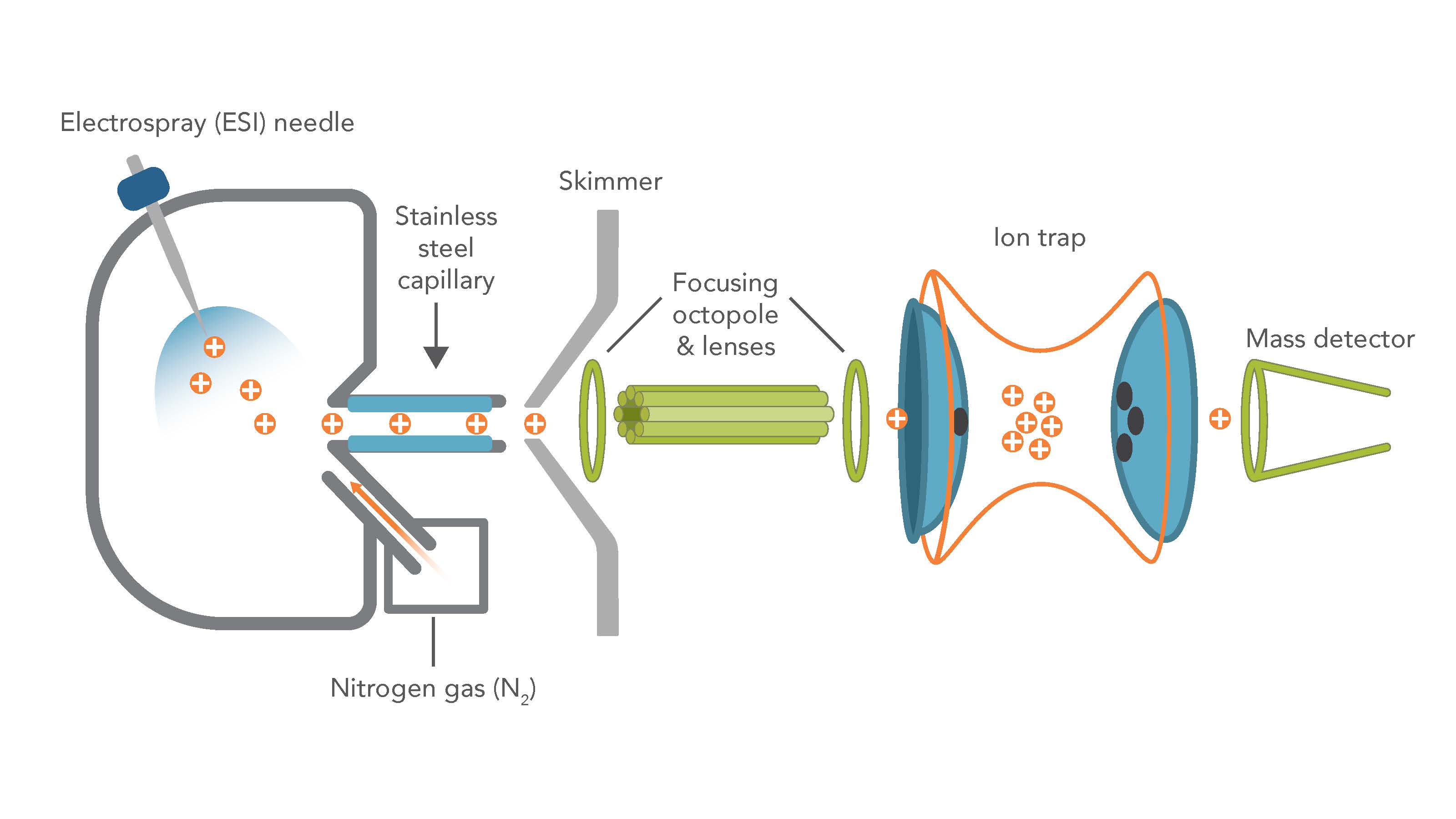 Figure 1. General components and mechanism of an ESI-ion trap MS instrument. Nitrogen gas addition results in ion formation in the stainless steel capillary. From there, ions are directed through focusing octopoles and lenses towards an ion trap device, where they are stored for subsequent mass measurement. Note: This schematic depicts a particular type of ion trap known as 3-dimensional, or 3D. Linear-ion traps, which alternatively possess 4 parallel rod-shaped electrodes, can also be used in ESI-MS instruments. IDT employs ESI-MS instruments of both configurations.

In conjunction with ESI, a variety of techniques and instruments can be used for the mass measurement step of MS. These include time of flight (TOF), which is closely associated with MALDI, and quadrupole mass analyzers.

At IDT, all of our ESI-MS instruments employ ion traps for mass measurement. In these devices, fluctuating voltages applied to direct current (DC) and radio frequency (RF) electrodes cause ESI-generated ions to become "trapped" between the electrodes. From here, ions can be ejected from the trap by varying the RF potentials so that only ions of a specific mass-to-charge ratio are forwarded on to the mass detector (Figure 1).

Why does IDT use ESI technology vs. MALDI?

In a 2004 publication, Hail et al. performed a comparison of data from ESI and MALDI-TOF systems using synthetic oligos ranging from 10–120 bases in length [1]. They reported that, while both systems provided high-quality data for standard 20mers, MALDI-TOF showed decreased resolution and accuracy for oligos greater than 60 bases, while the ESI system did not. They also noted that the ESI system outperformed MALDI-TOF in analyses of oligos with protecting groups, unusual chemistries, and dual-labeled probes.

Due to IDT’s ability to synthesize long oligos, many of which possess a range of complex modifications, these findings led a shift in our MS quality control methods from MALDI-TOF to ESI. We have continually refined our processes, and today we are able to provide extremely precise mass assessments for oligos up to 200 bases.

IDT offers free ESI-mass spectrometry quality control data for every oligo we synthesize*. For online orders, this information becomes available as soon as your order ships from IDT premises. To view MS data for your order, go to www.idtdna.com and sign in to view your account options. Select Order History and find the order for which you seek data. Once you've found it, click on the zip file under the QC/COA heading. There you will see all the trace files associated with your order.

* With the exception of mixed base oligos, which could potentially represent multiple sequences and therefore cannot be accurately evaluated by ESI mass spectrometry.

Your DNA or RNA sequence, desalted, deprotected, up to 1 µmol in tubes or plates. Verified by mass spectrometry.

No end to the modifications available. Shipped dried, hydrated, or annealed.

Indispensable for linking an oligo to another molecule, providing resistance to nuclease degradation, and more.