RainDance RainDrop™ technology and the use of IDT PrimeTime qPCR Assays

Digital technology has made its way into PCR, allowing researchers to perform abso­lute quantification of a target sequence by simply counting the number of reactions that contain a positive signal. Digital PCR (dPCR) instruments partition a DNA sample into millions of droplets of such small vol­ume that essentially all of the droplets con­tain either zero or one molecule of target DNA. Probe-based (5’ nuclease) quantitative PCR (qPCR) is performed to endpoint within each droplet using primers and fluorescent­ly labeled probes (e.g., PrimeTime qPCR Assays from IDT).

The dPCR instrument inter­rogates each droplet for probe signal, iden­tifying whether one of the target sequences is present—essentially a yes or no answer (Figure 1). The numbers of positive and negative droplets are counted in a simple digital format for a quantitative readout. The technique is highly sensitive, allowing scien­tists to perform single molecule analysis and levels of multiplexing that are not possible with standard qPCR.

Picodroplet-powered dPCR is the latest innovation

RainDance Technologies is one of the companies at the forefront of dPCR inno­vation, having introduced their RainDrop™ Digital PCR System in March 2013. Built on RainDance’s patented and proven RainStorm™ picodroplet technology, the RainDrop System generates up to 10 million picoliter-sized droplets per lane. Since each droplet encapsulates a single molecule, researchers can quickly determine the absolute number of droplets containing specific target DNA and compare that to the number of droplets with background wild type DNA. The RainDrop System also shifts the current dPCR paradigm from a single-color-per-marker approach to a “two color with varying probe intensity” method that is capable of multiplexing up to 10 markers.

“The RainDrop System represents the third generation of instruments built on our proven picodroplet technology and provides researchers with a new solution for generating digital answers across a num­ber of important applications, including low-frequency tumor allele detection, gene expression, copy number variation, and SNP measurement”, said Darren Link, co-founder, and vice president of research and develop­ment at RainDance Technologies.

A typical RainDrop dPCR setup uses stan­dard qPCR assay reaction mix that includes a master mix, PCR primers and hydrolysis probes, DNA sample, and the RainDance proprietary drop stabilizer. The reaction mix goes into the RainDrop Source Instrument which creates the droplets. Starting with a 50 μL reaction, 10 million droplets are creat­ed, each a separate 5 picoliter reaction. After thermal cycling, the samples are loaded into the RainDrop Sense instrument which reads out results in a digital format.

Coren Milbury, a senior scientist at Rain­Dance Technologies, clarified, “dPCR is very different from a standard qPCR readout, where you measure the cycle number when the fluorescence intensity passes a critical threshold (Cq). To get good qPCR results requires standard curves and calibration, and, in general, it is a lot more difficult to get precise reproducible results using standard qPCR. Of course, with dPCR, you still need positive and negative controls, but you don’t need them to determine the actual concentration of target in the reaction. Standard qPCR is just much more finicky and ultimately does not have reliable day-to-day and lab-to-lab reproducibility. dPCR is straightforward and highly reproducible.”

Probes of different types can be used for dPCR as long as they provide specificity. RainDance Technologies has collaborat­ed with IDT, making use of the IDT ZEN Double-Quenched Probes in RainDrop dPCR assays. In addition to the standard 5’ fluorophore and 3’ quencher, these double-quenched probes contain an internal ZEN quencher. While traditional probes consist of approximately 20–30 bases between the fluorophore and the quencher, the internal ZEN quencher decreases that length to only 9 bases. This shortened distance leads to more thorough quenching with much less background.

Double-quenched probes have been an im­portant reagent for RainDance Technologies as the digital counting requires counting both populations of droplets where there is no target sequence present to amplify as well as droplets where the target is present. The company’s researchers use a strong fluorophore (typically FAM, VIC, TET, or MAX) with their probes to generate well-defined clusters of positive signal. “Including the ZEN molecule as a second quencher has contrib­uted significantly to increasing our signal-to-noise ratio. When using dual-quenched probes, the negative drops emit less fluorescence than typically observed using standard probes with a single quenching moiety,” notes Milbury. “This provides a greater degree of separation between positive and negative clusters allowing for more precise counting of droplets in each population.”

For rare allele detection applications, RainDance Technologies has been working with IDT to develop an locked nucleic acid-modified ZEN double-quenched probe. The locked nucleic acid modification increases the Tm of the probe and thus provides greater probe specificity over target regions as short as 14 nt. “As shown in Figure 2, using this new locked nucleic acid-modified ZEN probe design has enabled us to increase our sen­sitivity and drop our lower limit of detection (LLOD) by as much as a factor of two,” said Milbury. “These probes allow us to improve our positive calling, improve the degree with which probes are correctly binding to the desired target, and to limit amplification of false positives.” 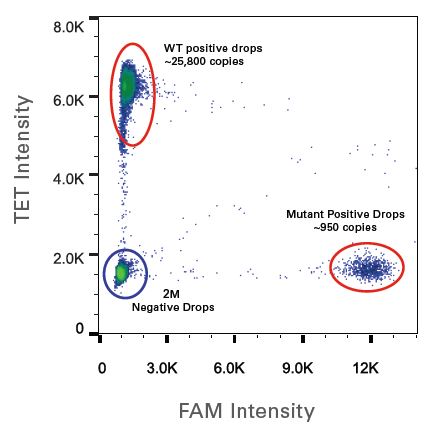 Figure 2. Locked nucleic acid-modified PrimeTime ZEN Double-Quenched Probes improve lower limit of detection on RainDrop dPCR System. The incorporation of locked nucleic acids within IDT ZEN Double-Quenched Probes (obtained as Affinity Plus qPCR Probes) have demonstrated strong performance within the RainDrop digital PCR platform. It is widely recognized that sequence-specific fea­tures make assay design challenging for the EGFR T790M mutant allele target (c.2369C>T). The use of these IDT probes improved the lower limit of detection by a factor of 2, from 1 mutant in 5000 WT alleles to 1 mutant in 11,000 WT alleles (data provided by RainDance Technologies and available upon request from info@raindancetech.com).

With the new era of digital PCR, scientists are already noticing how this ex­citing new technology is transforming the performance of molecular assays across many important applications. For example, the combination of superi­or sensitivity, unprecedented multiplexing, and flexibility in experiment design provide a powerful genomic analysis platform for new research in cancer, including rare variant detection, absolute quantitation of biomarkers, tumor profiling, and the ability to monitor residual disease.

Early efforts with digital PCR have also reported the ability to detect low, single digit percent­age changes in copy number variations (CNVs). Until now, identification of small CNV changes with high confidence has been an important measure­ment challenge in translational and diagnostic research. Additionally, the binary nature of dPCR means that the precision is more independent of variation in assay amplification, making it easier to optimize and standardize between laboratories.

Darren Link, co-founder, and vice president of research and development, was a physics postdoctoral fellow at Harvard University in 2004, studying complex fluids, microfluidics, and liquid crystals when, together with a group of 3 professors, he made the decision to found a company around droplet fluidics. Dr. Link noted, “It was very basic technology at that time—learning how to do biology in the droplets while stabilizing them against spontaneous coalescence, and developing chemistries and techniques for signal detection compatible with drop­lets.” Now with more than 85 employees, RainDance Technologies has applied its “amplification-in-droplet” science to targeted sequencing (e.g., amplifying up to 20,000 genomic target regions simultaneously by partitioning reactions into different droplets), and to digital PCR.