Advances in Genome Biology and Technology (AGBT) celebrated its 20th anniversary on a beautiful beach in Marco Island, Fla., in February. This was my first time attending AGBT, and I should have known that it was a different conference when a glass of champagne was handed to me as I walked into my hotel to check in. Opening speakers included NIH Director Francis Collins and molecular biologist Barbara Wold (fan girl shriek, but only internally because I’m introverted). The star-struck plenary talks were only the beginning of the night. We proceeded to have dinner on the beach with the B-52’s playing a live concert. I’ve always had a disdain for 80’s music, but there is something about living in that moment, eating spicy tuna rolls with your toes in the sand.

Back to business. At AGBT, 1,033 people joined together, from 26 countries, to collaborate and share their discoveries and breakthroughs in genomics. In my case, presenting a poster titled: “A Complete Automation and Reagent Workflow for Analysis of cfDNA: From Plasma to Variants.” I felt like I could puke. To be amongst the great scientists – some of them had written my college textbooks – was truly an honor. 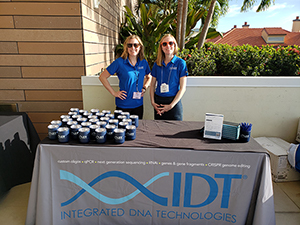 Three high-level summaries that don’t scratch the surface of the content within those four days, but I found very interesting included: